PICKLEBALL IS NEW AT PINEWOODS!

Pickleball is now happening at Pinewoods as we have just painted  2 new pickleball courts. There are several options available to you:

Cost Per Person: Varies depending on number of players in League (Based on Court Rate)

Our current teams include:

Court costs are shared by however many players are on the court. Members can reserve one week in advance, Non-Members 24 hours in advance.

Junior Rate is good for everyone on the court as long as one player is a junior and the court is reserved on the same day. Adult Non-Members pay a $12 Guest Fee.

Get Team Sweatshirt, discounts on clinics, events and lessons

Add Fitness At Pinewoods To Your Membership  for only:

Non-Members are always welcome at Pinewoods. In addition to the court rate, a $12 per person guest fee will be added. Non-Members may book courts 24 hours in advance and take unlimited private lessons at a higher rate than members. None-Members may substitute  on a Season Court up to 10 times per season and pay a $12 guest fee each time.

Includes unlimited use of all health club facilities
$29/Month

Includes unlimited use of Women's Only Room
$22/Month

Must live at same address
$19/Month

Includes use of all health club facilities

One Year Membership Paid in Full

No matter what your experience or level, PineWoods has a lesson that is right for you! 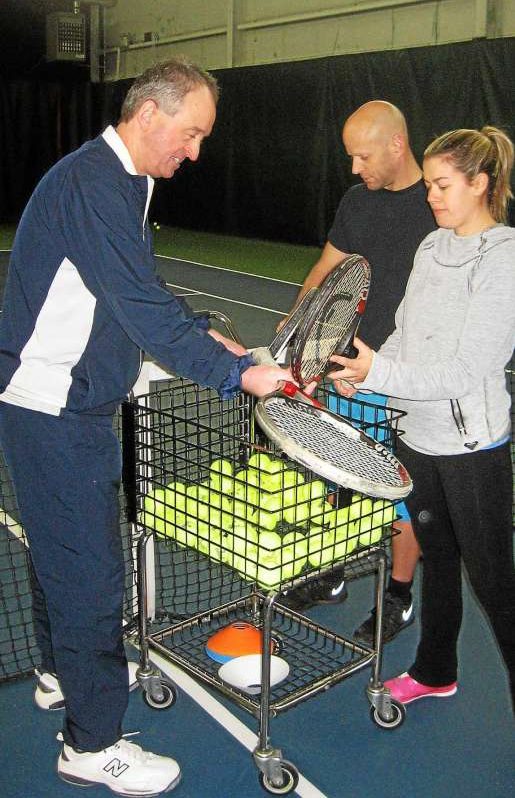 Bob is the owner and general manager of Pinewoods. He has been involved in the indoor Tennis Club Business for over 30 years in positions including Staff Tennis Professional, Head Tennis Professional, Director of Tennis and Club Owner. Before buying Pinewoods in July 2009, Bob owned and operated West River Tennis and Fitness Center in Southern Vermont for 11 years. Before Vermont, he worked at clubs in Syracuse, N.Y., Cincinnati, Ohio, and Washington, D.C. Bob has been a United States Professional Tennis Association Member at the highest level for over 30 years. He has taught several junior tennis players to Top 50 Rankings in New England. Bob is also a proven player. He was the #1 player in his college tennis team, State University College as Oswego, New York in the 1980s, and more recently, he was ranked in the Top Ten in New England Singles in his Division every year since 2002. He achieved his highest ranking ever in 2016 as he ended the year as the #1 Ranked Player in New England in Men’s 4.5 Singles. In 2009, 2010, and 2013 Bob was ranked #2 in New England in the Men’s 45 and over Singles Division. More recently, he has matched that high ranking in 2014 and 2015 with a #2 ranking in New England in Men’s 4.5 Singles. Bob has also been a Tennis Tournament Director for many years and created the Syracuse Adult Grand Prix Tournament Circuit in the Syracuse, New York area in the 1990s. The Syracuse Adult Grand Prix was a series of Tournaments held in the Syracuse, N.Y area where adults competed monthly to win prizes at the end of the year.

Want to learn the great sport of tennis? Or do you just need a refresher?

Our Back to Basics program is what you need to get you in the game.

$46 per each four class session

Check with the Front Desk or call us to get starting dates, additional information, or to sign up!

Designed to introduce high school students to the game. Players will learn basic strokes, scoring, and how to play points.

Incorporates more “live ball” drills so that players learn how to play in realistic point situations.

Pinewoods has 54 USTA Tennis Tournaments (Adult and Junior) throughout the year, the 2nd most of any tennis club in the Northeast. Check the USTA Tournament Website for Dates and other information or call the club at (860)482-9424.

First Time Golden Glow Tanners Get a 25% Discount On First Month of Tanning!

Current Tennis and Fitness members get a 10% discount!

Cash or personal check* payments only.

(*checks to read “pay to the order of Golden Glow Tanning)

PROOF OF EYE PROTECTION IS REQUIRED EACH VISIT .